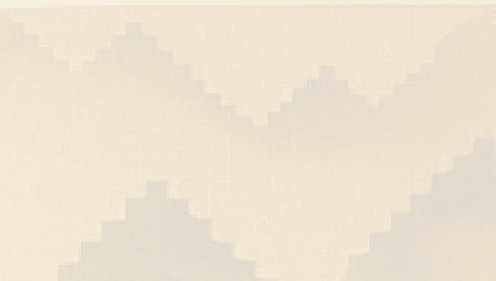 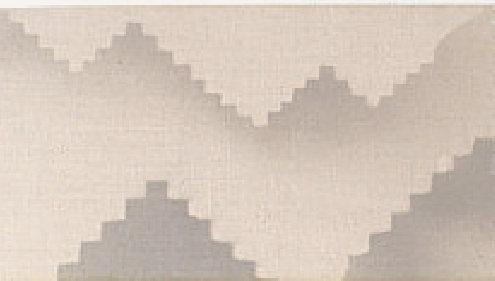 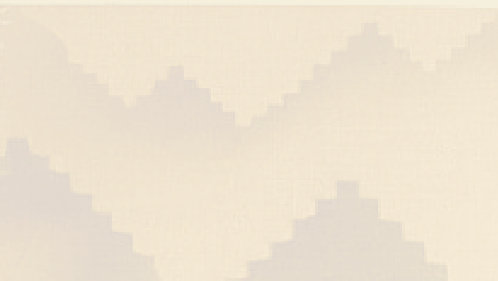 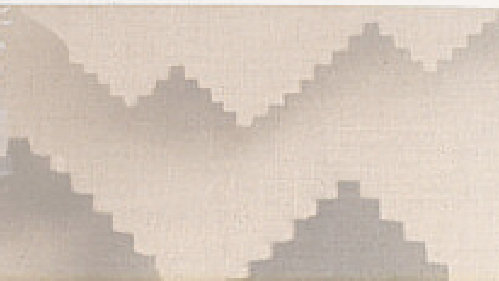 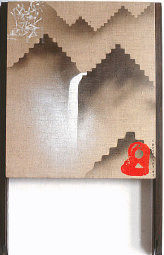 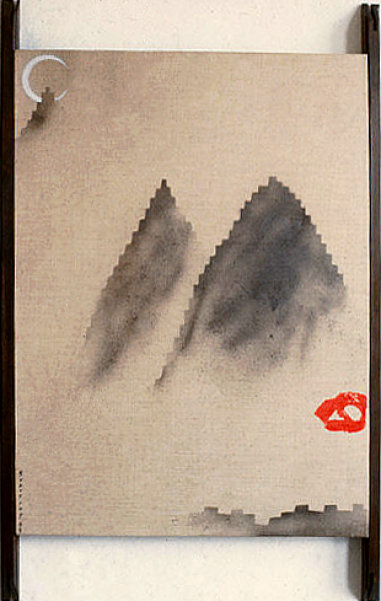 click on individual pieces to view larger
scroll down for history 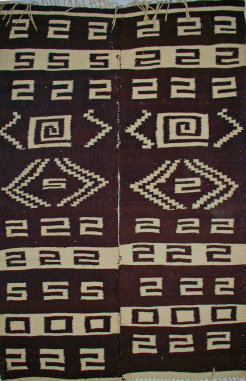 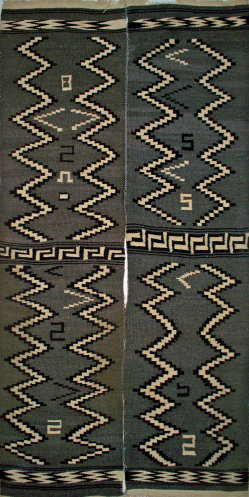 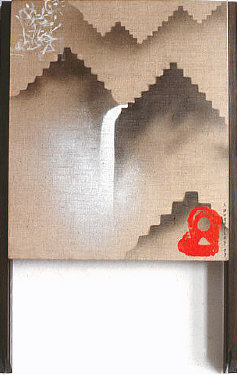 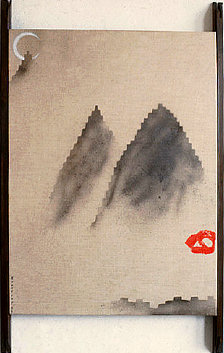 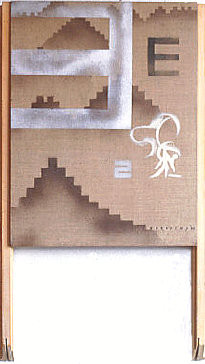 "BUILT
THE MANY BACKGROUND INFLUENCES OF THE STEPPED MOUNTAIN
PIECES" 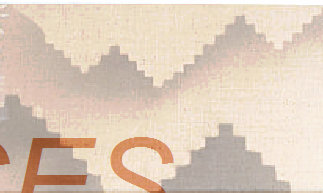 scroll down for
The group of works, represented by the four constructions from the "Built Pieces" part of the Stepped Mountain Installation, are transitional works which incorporate the most significant previous influences on the artist's thought with hints at elements which would define the visual language of works which would follow.
They are Borofsky's final studio artworks that incorporated spray-paint as a medium.
In the late 1980's Borofsky was becoming dissatisfied with the expressive limitations of spraypaint and was considering moving back to using traditional materials. Like stencil artist !Michael Roman, Borofsky felt that extended use of spray-paint would result in pulmanary problems, that it was an environmental pollutant, and was not a defining element to his creative thought.
Also, at this time, the artworld itself was in flux, the first examples of Post- Modernism were capturing New York's eye.
Borofsky wanted to remove color from these landscapes, compositions taken from the 'travel studies' made in Mexico and South America, and limited his palette to "Khaki", Silver, White, and Brown.
"Khaki", is a "Krylon" color that was discontinued a few years later. This color was significant to the artist as representitive of the three different Latin American war-zones he experienced, while in Guatemala, Columbia and Peru. The artist feels deep compassion for those trapped by war.
Borofsky had made constructions and sculptures from found materials in the early
Mary Boone Gallery in 1989, the artist would again make a transition in his approach to three-dimensional art.
Borofsky wanted to add a physical element to his work, taking the place of expressive color.
By 1988, Scot Borofsky had sold some paintings and drawings at Mokotoff Gallery in the three shows from the previous three years, and had upgraded the quality of the art materials in his studio. No longer was there the organized boxes of sorted !collage materials and found debris, but now canvas, linen and heavy stretcher bars had taken their place, along with Japanese brushes and hand-made papers.
Contemplating some of the thick stretcher bars from an expensive art store one day, the artist thought that they were so beautuful, he could not resist incorporating them right into the artworks, as visual elements. Aware of the toungue-in-cheek humor attatched to the idea, but excited about combining the spray-paint landscapes with the stretcher bars, the "Built Pieces" were born.

(clockwise from upper-left) Mixtec Serape with letters and spirals; 1987 spraypainting, "First Orb"; Japanese fan; construction, "SESS"; geodes used as seals; close-ups of seals from constructions; "chops" carved for the artist with his symbols; seals as they appear on the 'travel studies'.
This group of monotone spray paintings, transformed into constructions, underwent transformations twice as a group again, over two years, as the arist traveled, and returned home from long trips, evolving, and insisting that the art works evolve with him. After the group had been exibited, and some of the largest pieces purchased, other pieces from the group continued to evolve in the studio, becoming recepticals for virtually "every idea left untried". Many were destroyed, as "dead ends"s.
The pieces which became the focal point of all this transformation and conceptual hybridization, all have two elements added to the landscape-stretcherbar construction. The first is the inclusion of a stamped 'circle' in conjunction with a stamped 'triangle', or 'pyramid'. Both of these impressions were made using half-geodes, (full of tiny quartz crystals). The polished and cut sides were rubbed with red acrylic paint, and were then used like Chinese "chops", or stamps, to create 'seals' on the landscapes, emulating the seals applied to the egg tempera 'travel !studies' of stepped mountains. The addition of the red geode-seals gave the group a strong color element it had been lacking. Also, the 'stamping' process is uncontrollable, which added the element of 'chance', to the work.
The second element is the edition of some calligraphy-like brush work, which was executed "behind the artist's back", using a small lettering brush with white enamel paint. This was done suddenly after a long period of contemplation, and is actually improvisation, overlaying the "symbols" of Borofsky's earlier work on top of each other. This element, appeared in these works for the first time: the improvised use "symbols" as a means of expression; the layering of them; or distorting of them. This has become, for the artist, a key development in his visual thought process, underscoring the pivotal significance of the "built pieces", as "workboards".
By the time some of the constructions were being finished, the artist was making oil paintings based on Mixtec Weavings collected in Mexico. As the improvisational calligraphy began to become more developed in the "Serape Paintings", visual elements from the serapes entered into the evolving constructions. Concerns of Borofsky's about mixing stencils with freehand spraying, and with "what can be a subject?", come out in some of the late "Built Pieces".
"SESS"
1992
"Romantic Mountains"
1990
"The Source"
1992
"E-Z"
1992
"El Tajin", Mexico
"Ice Fishing", 2008, oil on canvas
"The Source", 2008
eighties, using materials found as refuse. As the 'East Village' began to become a focus for Real Estate investment, towards the mid-eighties, dumpsters full of cast off materials were prevelant, and the artist took work sometimes on demolition and sheetrocking work crews.
Two sculptures from this time, exhibited at Mokotoff Gallery, exemplified this development. They were three-dimensional versions of symbols, which had already been developed as paintings.
After seeing the newest works of Sherrie Levine's show at the
Scot Borofsky's "Built Pieces" are an important part of the !Stepped Mountain Installation, bringing an intense working and re-working, while experimenting conceptually and materially, "studio" element to the installation.
They represent the height of technique developed by the artist with spray paint, a type of paint which was, in many ways, the voice of the eighties. Borofsky's rejection of the material ends in work both serious and sentimental.
The effects of a rising interest in "Post-Modernism" and the conceptual and referencially intellectual bent of Post- Modern thinking are fused with the effects of !"Street Art", popularized in the East Village, and the "Modernist" vision of Borofsky's, searching for an ideal: a visual language accessable to all peoples and cultures.
Disparate influences such as Asian landscape painting; graffiti; pre-Columbian weaving and improvised abstract brushwork are brought together in poetic harmony in these works. The artist presents an art object unique in character which is both personal and worldly, creating metaphores without negating sensuality.
The "Built Pieces" demonstrate the artist's love for craft and his loyalty to painting technique; his need for humor and for an element of unpredictability. They also demonstrate that conceptual art may have a "heart". While striving to work on the frontier of creative thought, beauty and curiosity are not been abandoned in these works. And the individual character of the four different artworks underline the notion that, regardless of an artist's intellectual projections or strategic organization, every piece is a separate entity, a world of it's own, an experience both exclusive and independant.
The " Built" Pieces